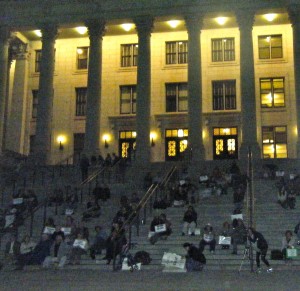 After seeing the measly, yet noble Utah death penalty protest in the foyer of the Scott Matheson Courthouse in April, tonight’s gathering was extensive and influential. Although the protest was led by the Utahn’s for Alternatives to the Death Penalty, it seemngly would not have occurred without the strong support of students and young adults knowledgeable about protesting. The group’s leader Ralph Dellapiana helped pass out candle’s to commemorate the light inside people; by ending the death penalty in Utah one could save that light inside someone instead of smashing it. However, the beautiful the sight of those candles flickering together and the inspiring speeches and musical selections asking for peace and humanity, will not be enough to end the death penalty in Utah. The group needs more support, and more visibility for their name. It seemed as though the gathering was not important enough to be noticed, as Utah Governor Herbert did not appear to be on location at the time, nor was he even considering a stay of execution.