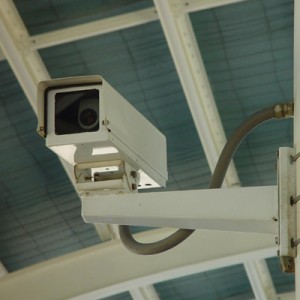 In a random act of vandalism, a man destroyed a security camera in a parking garage. The Salt Lake City Police Department is hoping the public will be able to help identify the man.

According to a report from KSL News, the vandalism occurred on Saturday, Nov. 8, when a man entered the parking garage of the Salt Palace Convention Center. Apparently practicing for when he’s rich and famous and has to fend off the paparazzi—or outright assault them, like celebrities Alec Baldwin or Sam Worthington—the man punched a security camera off the wall, then proceeded to pick it up and throw it to the ground.

Even though police don’t know his identity, they know what the suspect looks like. Before being assaulted, the video camera was able to grab an image of him. He is described as being white, approximately six-feet tall and 200 pounds. Police are guessing his age to be in his twenties.

At Least it was just Vandalism

When the man is caught, he will be lucky not to be Alec Baldwin or Sam Worthington. Well, at least as far as criminal charges are concerned. The vandalism charges in this case would most likely be less than assault charges.

According to Utah Code 76-6-106, vandalism is considered “criminal mischief.” Vandalism ranges from a class B misdemeanor, resulting in up to six months in jail and a fine of up to $1,000, up to a second degree felony, resulting in up to fifteen years in prison and a fine up to $15,000. The different levels are based on the following criteria:

For example, a second degree felony results when a person “recklessly causes or threatens a substantial interruption or impairment of any critical infrastructure” or if the property damaged is over $5,000 in value. The lowest conviction, the class B misdemeanor, results when someone’s actions endanger human health or safety (but not life) or if the property is less than $500 in value.

Vandalism, or criminal mischief, has a wide range of interpretation and potential subsequent punishments. If you or someone you know has been charged with criminal mischief, make sure to contact an experienced criminal defense attorney who will look out for your best interests.