Utah has highway laws in place to help prevent accidents and keep the flow of traffic moving freely. Violation of these highway laws not only proves a driver to be non-courteous, but can also result in fines or criminal charges.

More than 200 law enforcement officers have been struck and killed by passing motorists during traffic stops since 2000. On Sunday evening, a Utah highway patrol officer had a close call as she was nearly hit by a passing car while on a routine traffic stop along I-15. Officer Bambi Baie was pulled over behind a stopped vehicle when she realized an oncoming car was drifting toward her. Luckily for the officer, the approaching distracted driver saw the officer in time and was able to avoid a collision with the patrol car. Unfortunately, the 55 year old Cedar City woman who had been looking at her cell phone, over-corrected when she saw the UHP vehicle and rolled her car several times. She was taken to the hospital in serious condition and will likely face charges for violation of highway laws including operating a hand held device while driving and failure to move over for motorist on the side of the road.

UDOT workers put themselves in danger every time they put on that orange safety vest, as their workplace is surrounded on a daily basis by fast moving vehicles. To protect these workers and drivers, Utah has highway laws that not only prohibit speeding, but increase fines for those caught driving too fast in work zones. Speeding in a work zone will result in tickets that are double their normal rate.

“Stay right except to pass” is a sign seen often along Utah highways and is not merely a suggestion. Utah Code 41-6a-701 states: “On all roadways of sufficient width, a person operating a vehicle shall operate the vehicle on the right half of the roadway.” The far left lane is reserved for those moving faster than the flow of traffic, including law and emergency vehicles. The exceptions to this law are for those passing other slower moving vehicles, bicycles, mopeds, or if there is an obstruction in the road. Once the passing car has overtaken the other vehicles, they are to move over to the right lane immediately. By keeping to the right, traffic can move freely which will greatly reduce the amount of accidents on the highways.

Express lanes are available for motorist to bypass heavy traffic that can result from congestion surrounding on ramps and off ramps. In order to use the express lanes lawfully, drivers must be riding with at least one other human occupant in the car), driving a motorcycle, or have a paid express pass. Additionally, drivers are never to cross a double white line. According to UDOT, “violators of the Express Lanes can be issued a citation with a fine of up to $175.”

Traffic entering the highway from on ramps must always yield to through traffic. The same rule applies when merging is required due to a lane ending. The merging car is responsible for carrying out this maneuver safely, just as if they were changing lanes. While it is not legally required to let merging traffic enter, it is the decent thing to do as long as it can be done safely.

Be safe and courteous 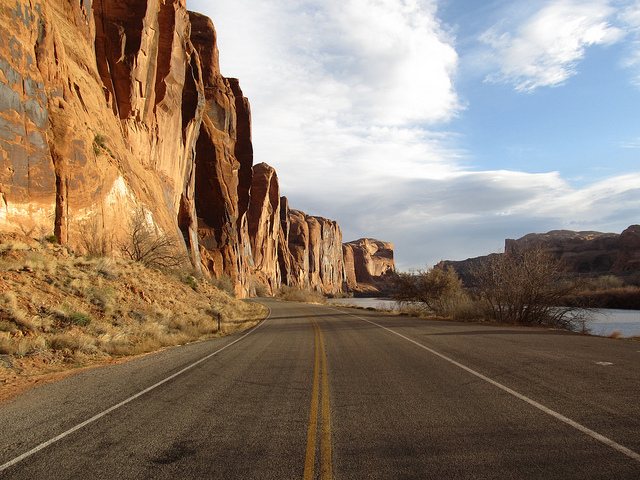 By following these and other Utah highway laws, motorist can travel throughout the state of Utah safely. While most violations of highway laws end in citations and fines, because of the high rate of speed they can quickly turn into negligent driving charges or even vehicular manslaughter. Obeying highway laws may also keep drivers from becoming victims of road rage. For more information on charges resulting in failure to follow Utah highway laws, contact a criminal defense attorney.