Anyone in Utah holding a raccoon or coyote in captivity illegally may now face reduced penalties thanks to S.B. 180 passed in early May.

Holding a raccoon or coyote in captivity 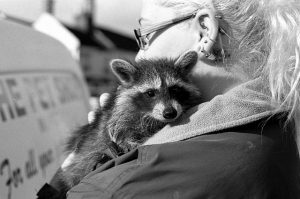 Some Utah residents interested in having non-traditional pets may trap a wild animal hoping to domesticate it. Other times an abandoned baby animal may be taken in by a do-gooder and raised alongside the family dog. Little do these individuals know, not only is it dangerous to try and home a wild animal, it can be illegal. Thanks to an amended law however, if the wild animal kept in captivity is a raccoon or coyote, the State of Utah has decided to reduce the penalties for those who hold one of these animals without proper authority.

Utah Code 4-23-111 reaffirms that “no individual may hold in captivity a raccoon or coyote, except as provided by rules of the Agricultural and Wildlife Damage Prevention Board.” That section of Utah Code has been amended to state: “any violation of this section [is now] an infraction.” This penalty is similar to a minor traffic violation. Prior to the 2018 General Session, holding a raccoon or coyote in captivity was a class B misdemeanor, punishable by up to six months in jail and a fine up to $1,000. While there isn’t any specific public instance that pushed this law towards leniency, it passed almost unanimously.

While an infraction is far better than spending half a year in jail, how do residents of Utah go about keeping a raccoon or coyote in captivity without breaking the law at all? According to Utah Administrative Code Rule R58-14, “upon filing an application for registration with the Department of Agriculture and Food, upon forms provided by the department, a permit may be issued by the department authorizing the applicant to hold in live captivity raccoons or coyotes for research, educational, zoos, circuses, or other purposed authorized by the Department of Agriculture and Food.” It goes on to note that “A separate permit must be obtained from the department for each individual raccoon and coyote possessed”. So although there are some instances when keeping these animals in captivity is allowed, unfortunately it does not apply for pets. Anyone interested in having other non-typical pets is encouraged to research the laws regarding those animals prior to purchase or capture.