A domestic dispute between two couples and a relative ended with an accidental discharging of a firearm within city limits. 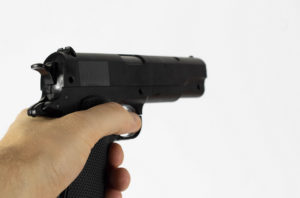 Police officers were dispatched to a call that someone had discharged a firearm within city limits and discovered a car speeding away from the scene. After pulling over the vehicle, officers discovered a car overloaded with people, two of which were injured. One was suffering from a head injury while another had a gunshot wound to the foot. Returning to the area in which the firearm had been discharged, officers were able to determine the individual’s head injury and the other person’s bullet hole in his foot to have been the result of a domestic dispute that had become violent. The shooting was accidental, yet the man with the weapon will likely face charges for assault for pistol-whipping the individual with a head injury, brandishing a weapon in a threatening manner, and discharging a firearm within city limits.

Utah is thought to be a more gun friendly state, yet there are strict laws and ordinances in place regarding where guns are allowed and where they can be discharged. Utah law 76-10-508 warns: “A person may not discharge any kind of dangerous weapon or firearm:

(i) From an automobile or other vehicle;
(ii) From, upon, or across any highway;
(iii) At any road signs placed upon any highways of the state;
(iv) At any communications equipment of property of public utilities . . . ;
(v) At railroad equipment or facilities including any sign or signal;
(vi) Within Utah State Park[s] . . .;
(vii) Without written permission to discharge the dangerous weapon from the owner or person in charge of the property within 600 feet of . . . a house . . . or any structure in which a domestic animal is kept or fed”.

Discharging a firearm within city limits 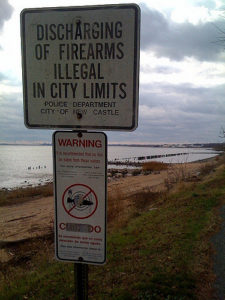 Beyond the above listed areas, Utah law does not specify where in a city firearms are lawful to be discharged. Utah Code 53-5a-102 states “All authority to regulate firearms is reserved to the state except where the Legislature specifically delegates responsibility to local authorities or state entities.” Many counties or cities have their own ordinances pertaining to discharging a firearm within city limits. The city of Springville where the domestic dispute resulting in accidental discharging of a firearm was reported states in statute 8-3-102 that “except as permitted by subsection (2) [regarding hunting in rural areas during designated seasons], it shall be unlawful for any person within the limits of the City to discharge any rifle, gun, pistol, air gun, bean shooter, flipper, sling shot, or any other instrument which expels a projectile, except in self-defense, or, in the case of target shooting, upon issuance of a permit by the Police Department. “

There are some occurrences when discharging a firearm within city limits would not result in criminal charges. Some such instances include self-defense cases when a person is found to be justified in using a weapon to protect themselves. Additionally, while state and many city laws prohibit firearm use near a residence, Utah homeowners are allowed to defend their home from dangerous intruders. This freedom to protect a home and its residents is known as Castle Doctrine.

Check with your local area

Besides in instances of self-defense or Castle Doctrine, all Utah residents should be aware that brandishing a weapon during an altercation or discharging a firearm in city limits will likely be frowned upon by law enforcement. Others who may want to engage in innocent target shooting or “air-soft wars” may want to check with their local area ordinances prior to engaging in any such activity that could result in criminal charges.

A hatchet wielding man was held at gunpoint by a citizen after a confrontation with another individual in Provo Utah. 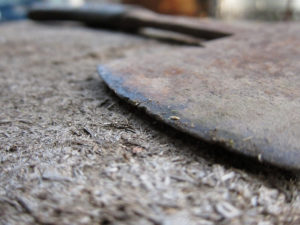 55 year old Galen Williams was driving along a Provo, Utah road when he didn’t obey proper rules or etiquette regarding a crosswalk and pulled too far over the crossing lines. An individual who may have been in the crosswalk when Williams approached got into a verbal altercation and was then followed by Williams into a nearby parking lot. There Williams attempted to confront the individual but was stopped by the victim’s father. Williams struck the father in the face with his fist then went to the back of his vehicle and retrieved a hatchet. The father took a firearm from his own vehicle and pointed it at the hatchet wielding Williams until police could arrive.

Although Williams may have had no plans to actually use the hatchet on one of the victims, he displayed the dangerous weapon during an altercation which could have been taken as a threat of violence with the hatchet. Aggravated assault with a deadly weapon that does not result in serious bodily injury is a third degree felony.

No charges for the armed citizen

Williams was not the only individual to display a weapon during the confrontation in the parking lot. The father of the victim who turned into a victim himself after being punched in the face pulled a gun on Williams during the incident.  Although the father’s choice of a firearm is also considered a dangerous weapon and had the potential to do more harm from a distance, he will not face any charges for pulling a gun on his assailant.  This is due to Utah law giving people the right to defend themselves.

Force in defense of person

Since the father of the victim was not the one to start the fight and didn’t intentionally aggravate Williams to make him reach for the hatchet, his choice to pull a loaded firearm on Williams in his defense was justified.  Anyone who may be facing aggravated assault charges for displaying or using a weapon during an altercation is encouraged to speak with an attorney to see if their case may actually constitute force in defense of person.

Many drivers are guilty of showing hostility to other drivers occasionally but when does aggressive driving escalate to road rage, and what difference does it make legally? 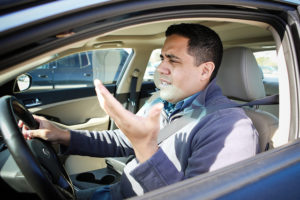 Driving can be a stressful event when dealing with other drivers on the road that don’t always make the best decisions. Although bad drivers are literally everywhere, residents of the Beehive State seem to think that the majority of horrible drivers call Utah home. Many Utah drivers will encounter (or cause) at least one incident a day that shows inexperience, poor judgement, disregard for other drivers, or distraction on the road. When these events occur it can be upsetting and how drivers handle their annoyance or anger towards other drivers could make the difference between whether or not they face criminal charges.

Early last month, hundreds of vehicles heading north towards St. George, Utah on I-15 remained at a standstill for several hours, after authorities processed the scene of a road rage incident that claimed the life of innocent driver on the opposite side of the freeway. There is no information on what caused the road rage, but fellow drivers reported three vehicles that were headed southbound on I-15 were being driven aggressively when things quickly escalated. In an attempt to pass a car on the inside shoulder, one of the drivers involved lost control and struck a northbound vehicle, killing 69 year old Michael Prinaris of Henderson, Nevada instantly.

The National Highway Traffic Safety Administration (NHTSA) defines aggressive driving as “The operation of a motor vehicle in a manner that endangers or is likely to endanger persons or property.” They state that an aggressive driver may display the following behaviors:

• “Following too closely,
• Driving at excessive speeds,
• Weaving through traffic, and
• Running red lights and signs, among other acts”.

The NHTSA states, “aggressive driving occasionally escalates to gesturing in anger or yelling at another motorist, confrontation, physical assault, and even murder. ( . . . ) Road rage is the label that emerged to describe the angry and violent behaviors at the extreme of the aggressive driving continuum.” The turning point between aggressive driving and road rage is someone can drive aggressively, possibly putting others on the road in danger while road rage is deliberate actions intended to do harm to another driver.

According to the NHTSA “an important distinction is that aggressive driving is a traffic violation, while road rage, aside from the yelling and gesticulating, is a criminal offence.” While it is true that more serious criminal consequences can occur from committing acts of road rage, the state of Utah actually punishes aggressive drivers as well. Utah Code 41-6a-528 defines reckless driving as when a person operating a vehicle does so “in willful or wanton disregard for the safety of persons or property; or while committing three or more moving traffic violations ( . . . ) [within]three miles of less in total distance.” Utah’s definition of reckless driving sounds a lot like what can occur during aggressive driving and that can result in class B misdemeanor charges.

Road rage is punishable by whatever criminal act a person performed because they were angry at another driver. Beyond reckless driving charges, road rage can also produce charges of:

• Misdemeanor assault if one driver physically assaulted the other driver;
• Threat of violence; also a misdemeanor charge;
• Possession of deadly weapon (vehicle) with criminal intent, a class A misdemeanor. 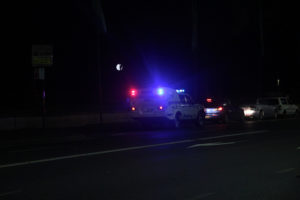 Unfortunately for many cases, Road rage can also result in felony charges such as:

Anyone facing charges related to an aggressive driving or road rage incident should seek the help of an attorney immediately.