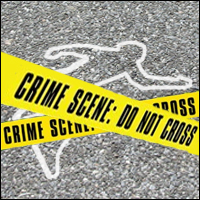 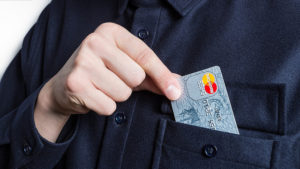 A California couple was arrested for forgery in southern Utah after police discovered the duo had been washing and reprinting money to create counterfeit bills.

46 year old Dean Anthony Fagas and 38 year old Crista Jeanette Avila, both of southern California were arrested after a grocery store located in St. George, Utah reported a woman to have been trying to use what appeared to be counterfeit money. Police located the woman nearby and found her to be in possession of multiple hundred dollar bills that were not what they seemed.

After inspecting the bills officers determined them to be counterfeit and upon investigating further, found that other fake bills had been used at various stores throughout the St. George area. The woman, Crista Jeanette Avila, told officers that her boyfriend who was waiting for her at a motel would wash one dollar bills then reprint them as hundred dollar bills. Then Avila would use the fake bills at stores, returning to the hotel with the real monies she received as change. Officers went to the hotel where they found Dean Anthony Fagas and the equipment used to make the counterfeit bills. Although Fagas originally denied his involvement in the fraud scheme, he eventually said he was aware of what was going on but put the blame solely on Avila. Avila and Fagas were both arrested for fraud as well as forgery.

Utah Code 76-6-501 states, “a person is guilty of forgery if, with purpose to defraud anyone, or with knowledge that the person is facilitating a fraud to be perpetrated by anyone, the person:

(a) Alters any writing of another without his authority or utters the altered writing; or
(b) Makes, completes, executes, authenticates, issues, transfers, publishes, or utters any writing so that the writing or the making, completion, execution, authentication, issuance, transference, publication, or utterance. . .”
That section also defines “writing” to include “printing, electronic storage or transmission, or any other method or recording valuable information including forms such as:
(i) Checks, tokens, stamps, seals, credit cards, badges, trademarks, money, and any other symbols of value, right, privilege, or identification. . . “ 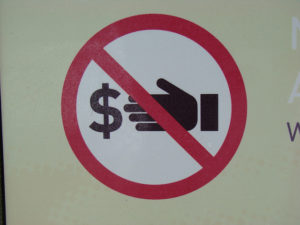 While those who create counterfeit money can face criminal charges for their actions, so can those who end up with the fake cash when they unknowingly spend the fraudulent bills. Since most counterfeit money is found in higher valued bills, anyone using 20, 50 or 100 dollar bills are encouraged to be aware of any abnormalities in the print and feel of the monies. They should also look for identifying watermarks as well as any embedded thread or security strip. While looking for any watermark or thread can be done quickly by holding a bill up to the light, it is important to note that scammers will often use actual low value currency to create higher value counterfeit bills. Checking a bill in the light for ANY watermark or thread is not enough to avoid fraudulent bills since a five dollar bill could be bleached and reprinted as a 100 dollar bill. To avoid accepting fake cash, it is imperative that those accepting large bills ensure the watermark matches the portrait or the monetary value of the bill they are getting. Anyone facing charges for unknowingly using counterfeit bills should consult an attorney immediately. 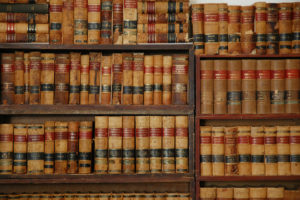 Minneapolis, MN lawyer Paul Hansmeier along with his brother Peter Hansmeier and co-conspirator John Steele used their legal expertise to not only sue individuals for pirating pornography, but to plant the movies on file sharing websites for the unsuspecting individuals to find. Hansmeier and accomplices created or obtained rights to pornographic movies before uploading the files to sites known for pirating movies. They then waited for downloaders to take the bait. Once the movies were downloaded, the trio claimed to be representing the companies who created the movies and sued those caught pirating. After collecting a three grand each settlement from hundreds of thousands of online downloaders, the million dollar illegal business was finally discovered and shut down. 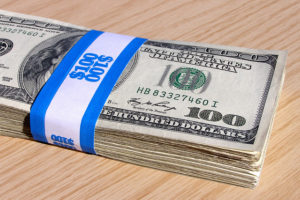 After extorting the individuals pirating porn for nearly six million dollars, the phony legal team was busted and charged with fraud as well as federal charges for money laundering. Money laundering has been considered a federal offense since the Money Laundering Control Act of 1986 was passed. Section 1956 of the Act states: “Whoever, knowing that the property involved in a financial transaction represents the proceeds of some form of unlawful activity, conducts or attempts to conduct such a financial transaction which in fact involves the proceeds of specified unlawful activity. . . With the intent to promote the carrying on of specified unlawful activity; . . . knowing that the transaction is designed in whole or in part . . . to conceal or disguise the nature, the location, the source, the ownership, or the control of the proceeds of specified unlawful activity . . . shall be sentenced to a fine of not more than $500,000 or twice the value of the property involved in the transaction, whichever is greater, or imprisonment for not more than twenty years, or both.“ Hopefully with their background in the legal field, the criminal charges brought against the extortionists came as no surprise.