A squatter has been charged with numerous offenses including aggravated assault for chasing the homeowner away with a machete. 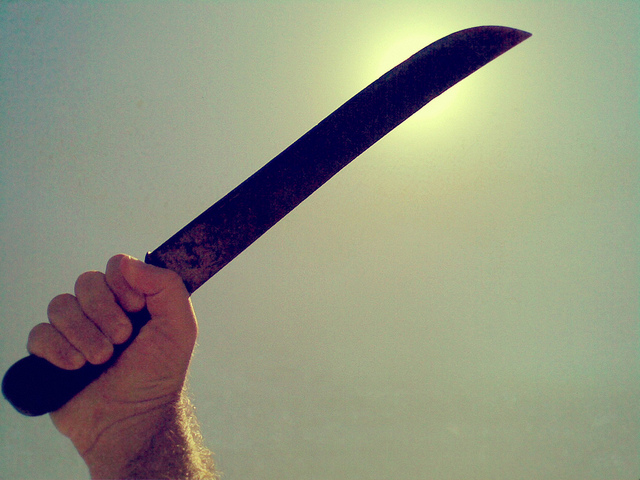 A Kearns Utah family came home to an unwanted holiday surprise when they returned to inspect the damage of their home after it suffered a terrible fire earlier in December. The homeowner noticed a car in the driveway and once inside, called out to the uninvited guest. They then observed the man leave the house and decided to follow him outside. It was there that the squatter, 25 year old Scott Thomson appeared with a machete threatening the homeowner with bodily harm.

Although Thomson didn’t actually hurt the homeowner, the fact that he threatened them with harm is what brought the assault charges. Utah code 76-5-102 states that even attempting to do someone harm is considered assault. Adding what code 76-5-703 states is a “deadly weapon” raised that offense to aggravated assault. Threatening to do harm without causing bodily injury is assault, a class B misdemeanor. Making that same threat while holding a machete is aggravated assault, a 3rd degree felony. Charges of course increase if there is essentially harm done to the victim.

It is unknown what Thomson’s state of mind was when he chased the homeowner away with a machete. There were drugs found at the scene and it is entirely plausible that he was under the influence of narcotics. Whether he acted out of aggression toward someone crashing his solo house party of out of fear of being caught didn’t matter to the responding officers. Once he advanced toward the homeowner while holding the machete he was facing aggravated assault charges. Acting unwisely in the heat of the moment is a precursor to many charges, including assault and aggravated assault. Requesting the aid of a criminal defense attorney will help bring all the surrounding factors into consideration before the judge decides on sentencing and punishment.

Sentencing has been postponed for former Utah pediatrician Johnny Wall who was convicted in March for the murder of his ex-wife. On September 27th 2011, cancer researcher Uta von Schwedler was found drowned in her bathtub with high levels of Xanax in her system and lacerations to her body. What was originally thought to be a suicide was later determined to be murder.

Although it was previously assumed that Schwedler had committed suicide, the son of Wall and Schwedler was suspicious of his father’s involvement in his mother’s death. He testified of Wall’s growing animosity toward Schwedler and was convinced she had no signs of depression that would lead to suicide. The son who was just 17 years old at the time of his mother’s death, pleaded with authorities to further investigate his father. In April 2013 Johnny Wall was arrested and charged with the murder of Uta von Schwedler.

Convicted by a Jury

2 years after his arrest, Johnny Wall’s case went to trial. After over 6 hours of deliberation, Wall was convicted with first-degree murder by a twelve person jury in March 2015. Following the hearing, jurors stated a few reasons behind their vote: the suicide scene that appeared staged, Wall’s questionable interviews with police, and testimonies from the son about Wall’s post-divorce bitterness toward Schwedler.

Not always as cut-and-dried as it seems

Wall’s attorney requested the delay of sentencing amid protests from Schwedler’s family. Although he declined to give any information as to the approach to be made in the appeal, previous arguments from the defense debated the farfetched story of a staged suicide and lack of evidence at the scene. The new sentencing date is set for July 2015.
A person facing first-degree murder is looking at a high probability of life in prison. Before carrying out such a sentence, there shouldn’t be a shadow of a doubt of the convicted person’s guilt. An experienced criminal defense attorney will know this and work hard to ensure a fair trial.