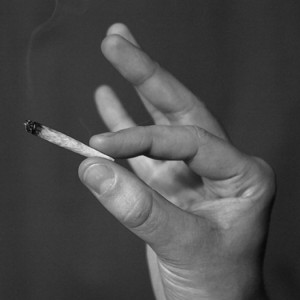 In an episode of animated show “The Simpsons,” Homer is mistakenly admitted as a patient to his father’s retirement home. Once there, however, he realizes all the comfort care–and medication–the elderly get, and he decides to stay. However, it wasn’t a Simpson’s episode, or even a regular sitcom plot, when a man was arrested for marijuana possession and two other charges at Salt Lake assisted living facility.

On Friday, Oct. 24, at approximately 7 p.m., supervisors of The Coventry, located at 6898 S. 2300 E., reported to police that they smelled marijuana coming from one of the rooms. According to a report from KSL News, when police approached the room, the odor grew stronger. Cottonwood Heights police Sgt. Corbett Ford stated that when Keaton Yates, 24, stepped out of the room, he still actually had a smoldering marijuana joint in his pocket.

“He went up there either to get high with grandma or use grandma’s room,” Ford said, “and hope that nobody would call him out.”

Or maybe he was bringing grandma something else. In addition to marijuana possession, Yates also had oxycodone pills and a butterfly knife on his person. In addition, it turned out he had a warrant for failure to appear in court on a domestic violence assault charge.

He was booked into the Salt Lake County Jail for the marijuana possession, plus investigation of a weapon violation and prohibited acts with a controlled substance.

Even though our neighbor to the east has decriminalized marijuana possession, it is still a crime in Utah. According to the Utah Controlled Substances Act, Section (2) “Prohibited acts – B,” it is unlawful for any person to possess or use a controlled substance, “unless it was obtained under a valid prescription or order.” Marijuana possession ranges from a class B misdemeanor to a second degree felony based on the amount in the suspect’s possession. In the case of Yates, it would be a class B misdemeanor because he had less than an ounce. The gradients then go from one ounce to one pound, one pound to one hundred pounds, and over one hundred pounds, the second degree felony.

The class B misdemeanor marijuana possession, where most casual users fall, carries a potential jail sentence of up to six months in prison and a fine of up to $1,000. Remember the key is “up to.” Don’t leave your fate in the hands of a public defender. If you have been charged with marijuana possession, contact an experienced criminal justice attorney who is looking out for your best interests.