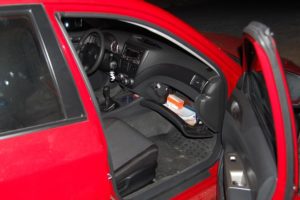 Both the buyer and the seller of a a vehicle were arrested on theft charges when the actual owner returned to Utah to collect his automobile.

An employee of a Big ’O Tires shop in Price, Utah was arrested for second-degree theft after he sold a 2008 Hummer that had been left at the shop by a customer. The customer who was passing through Utah earlier this year stopped at the tire store when his vehicle started having mechanical problems. The customer took longer than usual to return for his vehicle but when he did, the Hummer was nowhere to be found. Police were able to determine that the vehicle had been fixed and then resold to another person.

From one Travis to another

28 year old Travis Loveland was working at the Big ‘O Tires when 33 year old Travis Jordan came in to purchase tires for his vehicle. For reasons unknown other than a small financial gain, Loveland approached the customer and offered him the 2008 Hummer for an easy one grand. Although the $1,000 deal for the Hummer seemed too good to be true, Jordan accepted the deal with Loveland and later returned to complete the transaction. It wasn’t until several months later when police knocked on his door that Jordan realized why he received such a screaming deal: the Hummer was technically stolen.

Loveland was booked in the Carbon County Jail on second-degree felony theft for selling a stolen vehicle while Jordan is also facing second-degree felony theft charges for receiving stolen property. Utah Code 76-6-412 states “Theft of property and services . . . is punishable as a second degree felony if the:
(i) Value of the property or services is or exceeds $5,000;
(ii) Property stolen is a firearm or an operable motor vehicle; or
(iii) Property is stolen from the person of another.”

Be wary of suspicious sales

There are many instances when someone unknowingly gets in trouble for being on the receiving end of deal involving stolen property. Even if they know they are innocent, a court of law may not see it that way. This is why it is imperative that anyone facing charges consults with a knowledgeable criminal defense attorney prior to their initial hearing.

A Utah woman has been charged with multiple counts of theft by deception after she used her job to give huge discounts to family members and friends.

25 year old Janae Cook of Provo, Utah was arrested after the company Wayfair where she worked as a customer service agent in their call center discovered she had been giving huge discounts to people she knew. Nearly 40 times over a six week period Cook had handled orders from her family members and friends in which she discounted their items by as much as 80% off. The total amount illegally discounted by Cook was around $69,000.The company was able to catch many orders before they processed, yet still faced a pecuniary loss of nearly $22,000. Wayfair, a now billion-dollar online company who sells home décor and furnishings worldwide, has nearly 10,000 employees working at the numerous warehouses and customer service centers throughout the U.S. and other countries. Although Wayfair is a big company and likely won’t feel the monetary effects from Cook’s deceit, she still committed a crime and will face criminal and possibly civil penalties as well for her theft by deception.

Utah Code 76-6- 405 states: “A person commits [theft by deception] if the person obtains or exercises control over property of another person:
(i) By deception; and
(ii) With a purpose to deprive the other person of property.”
That section goes on to explain that the deception and the actual deprivation of the other person’s property “. . . may occur at separate times.” They also note that “Theft by deception does not occur when there is only:
(a) Falsity as to matters having no pecuniary significance; or
(b) Puffing [or exaggerated commendation of wares or worth] by statements unlikely to deceive an ordinary person in the group addressed. “

Theft by deception occurs when someone intentionally lies, cheats, or cons another into obtaining their property. In the case of Janae Cook, she likely knew giving her family huge discounts was wrong since even handling transactions with loved ones was against the rules. In fact, Wayfair knew such problems could arise when family members or friends helped each other with sales. For this reason, Wayfair prohibited employees from handling orders when it involved their friends and family. By crossing the line and breaking that rule, Cook not only broke the trust of the company she worked for, she set herself up to be used for her position in the company by those that she herself trusted.

While investigators didn’t disclose whether or not Cook offered the discounts to friends or merely granted requests, it isn’t uncommon for friends and family to ask for deals even if it means putting their loved one in an uncomfortable and fraudulent predicament. When a loved one is in a position to give deals with their company, many family and friends will take advantage of that opportunity. Unfortunately even when there are no deals to be had, there are still those who will try and beg to be given special treatment and prices, even if it means asking someone to bend the rules in their behalf. When caught, it is the generous employee who usually gets the boot. In the case of Cook, the boot followed by possible years in prison.

Although generous family members who deceive the companies they work for are still knowingly committing theft by deception, there are times when someone does not know there was miscommunication given. At times someone may obtain another’s property without knowing there was false information involved in the exchange. If the theft by deception occurred without the perpetrator knowingly deceiving another, it could be nothing more than an honest mistake that could cost them dearly if not portrayed correctly in legal proceedings. For this reason, anyone facing charges if theft by deception, regardless of their intent, should always consult with a criminal defense attorney prior to their court date.